The Audio Verse Awards are an annual celebration, dedicated to the greatest people and productions in immersive audio fiction around the world, whether it’s an audio play, improvised, or spoken word production.

In order for a production to be eligible for the Audio Verse Awards, it must meet the following requirements:

These are the current terms and definitions we are using for the Awards:

Action Sound Design: The sound effects that convey the actions, movements and motions of characters.

Audio Play: A style of storytelling which operates in scripted dialogue to convey the story.

Environment Sound Design: The sound effects that convey the scenes the characters are in, the ambiance which immerses us in another location.

Improvised: A style of storytelling where the events’ outcome is decided as they are played out.

Instrumental Composition: A song where only instruments are played.
Leading Role: The main characters of the story, Leading roles anchor the production around them.

New: A production which has premiered its first episode during the eligibility period.

Performer: The person bringing a text to life through their performance.

Player: The person who reacts and responds to a scene as their character would.

Player Director: The person organizing and moderating a group of players in an improvised production.

Role in an Ensemble Cast: These are roles in shows without main leading roles where the cast operates in an ensemble, sharing the spotlight as each character gets a turn.

Spoken Word: A style of storytelling where a single performer embodies a story and details as they convey them to the audience through prose or poetry.

Supporting Role: These characters flesh out the world of a production with leading roles, interacting and shaping the main characters.

Vocal Composition: A song with a vocal performance.

Vocal Director: The person encouraging and tempering the work of a performer as they record.

Writer: The person generating words on a page for a performer.

These thirty-two categories will recognize the top five in each as decided by preferential voting, recognizing 160 winners for this upcoming year.

Are you having the awards this year?

Lord willing and the creek don’t rise, the awards will go on, and on, and on, for many generations to come. 🙂

How does this work? 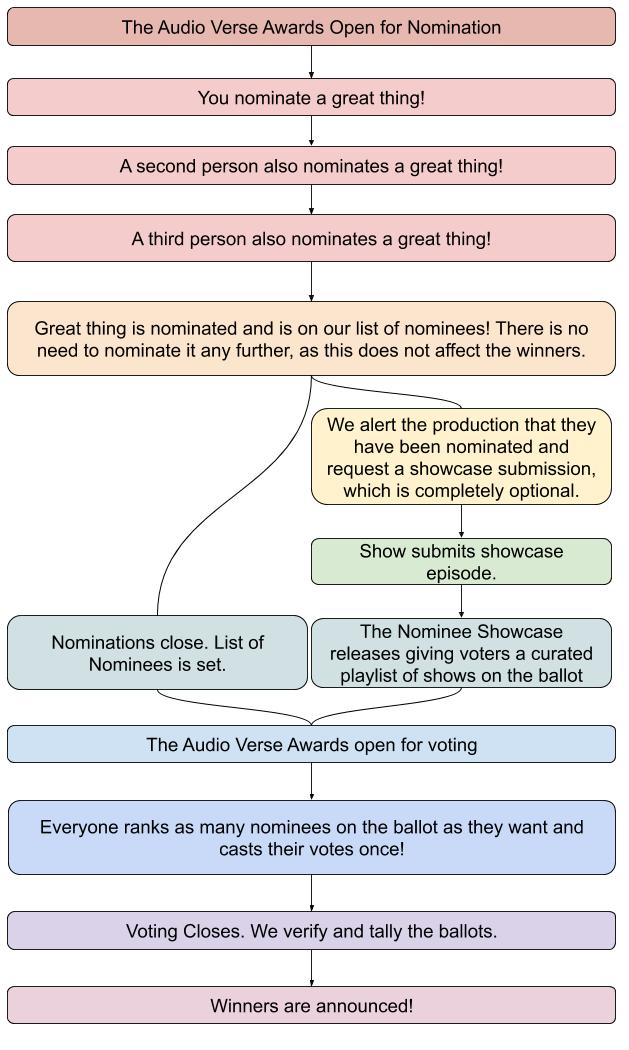 We try to open for nomination in September and voting in October.

I nominated something, why isn’t it on the website?

Firstly, we currently require a nominee to have three separate nominations from separate people in order to make our list of nominees.

Secondly, our automated system requires nominee spelling to match in order to automatically publish to our list of nominees. We’ll be sitting down on Sundays during the nomination period to fix any strays, but please double check your nomination matches the show’s website.

Lastly, It could be because the thing you nominated wasn’t eligible for some reason or another. If you are not sure if your nomination was eligible or not, feel free to drop us a line.

If I nominate something multiple times does it increase its chances of winning?

Nominating the same thing multiple times does not increase its chances of winning. We require three separate people to make a nomination in order for it to be nominated. You will receive an email with your nomination details, so if you continue to nominate the same thing over and over, you’ll continue to send yourself e-mails. We shall ignore duplicate nominations from the same person.

Our production is an Audiobook. Does it qualify?

Our focus is on productions which are experiences in audio. While most audiobooks have excellent narration and quality, unless there is performance and production design unique to the audiobook and not the text, it is likely ineligible.

There are awards specific to audiobooks, and they do not allow Audio Plays, Improvised or Spoken Word productions to participate due to them not having a published book. We would like to celebrate those productions.

Our production is the ripped audio from a video version. Does it qualify?

Our focus is on productions which are exclusive experiences in audio. Unless the audio version is unique and different than the video version, it is not eligible to participate.

Our production is behind a paywall. Does it qualify?

Starting in 2019, we are allowing productions behind a paywall to participate in the awards. We will watch the data we receive from that and consider how this move impacts our awards down the line.

Our production is a variety show, with some scripted sketches and some improvised portions.

Our production records our improvised sessions, transcribes, edits and adds additional scripted content, before recording and releasing it.

Do we participate in the Improvised and the Audio Play Categories?

At this point, the AVA’s committee is considering the production as a whole and how it’s perceived by the listener, and what shows the production should consider peers. Naturally, there are shows which cross lines and we’re going to look into those on a case by case basis.

As a whole, the Variety show described has a consistent cast in an ensemble, and the improvisation is supplementing content that originated as a script. We would ask that show participates in the Audio Play Categories only.

The Improvised production described supplements the decisions made by the players during improvisation, which remains the focus at the heart of the production. We would ask that those shows participate under improvisation.

We want to keep people on an even level, as best as we can, and we feel this gives those shows a chance to compete with their peers. Hopefully, that allows you to have the best chance of success in the awards.

I know nominations ended on September 30th, but we just found out about this. Is there any way we could get our show on the list of nominees?

We’re sorry, but once the list is finalized and the voting form is set, there is nothing we can do. However, if you join our mailing list, we will make sure you know when nominations open up next year. We’ll look forward to seeing your show in the running then!

Who is allowed to vote?

Any lover of audio fiction, whether they show that passion in creating or listening.

The members of our team do not affect the outcome of the awards. Instead, we have the largest panel of judges; all of you.

If you let listeners vote, you’ll turn the awards into a popularity contest! What about voting fraud? Why are you letting people on the internet vote instead of letting a committee decide who wins?

In our experience, listeners vote even better than creators do. We have found that leveling the voting field is the fairest decision possible.

Opening voting up to the entire audio drama community keeps things fair, fresh, and open in ways our committee never could. We find a great number of people willing to listen to other productions and find joy when they discover something new.

We get the popularity contest comment a lot. Our response is that Art is subjective, and the criteria to judge can vary from person to person. However, we find objective truth in consensus. We have a voting system designed to learn the greatest preference for that reason. Rank the nominees on the ballot as best as you see fit. We trust your judgment.

As far as voter fraud is concerned, we take steep precautions to prevent cheating. Any votes we determine to be fraudulent will be disqualified and those voters will no longer be allowed to participate in the Audio Verse Awards.

How do you deal with ballot stuffing?

Look, we get it, you really like a particular production or show. That’s a good thing!

However, our voting system is designed to reward voters who listen to a variety of productions. The more nominees you rank, the more powerful your vote becomes.

Maybe you should check out our Nominee Showcase?

What I’m nominated for is really truly great and deserves my vote. Can I vote for my own thing, right?

We love this question because the people who do make something truly great always ask it.

Like any election, who and what you vote for is completely your prerogative. Please be an informed voter, and take some time to look through the other Nominees and listen to their Showcases. You can always rank them alongside yourself.

What do we get if we win?

Besides fortune and glory, a special graphic for your website, your Facebook, or wherever you’d like to share it. We’re also offering the graphic in a certificate on our store, which allows us to keep the awards operating and pay the people behind the awards.

We also have a perk on our Indiegogo which allows our supporters to sponsor giving a winner of their choice a certificate.

We didn’t win. THIS AWARD SHOW IS OBVIOUSLY BIASED AND YOU’VE RIGGED THE SYSTEM!

Okay, calm down. There are a lot of shows out there.

While the idea of being like Oprah and going “You get an award! You get an award! Everyone gets an award!” (Check under your seats) is awesome, and probably would be a fun thing to do, it wouldn’t be meaningful to win. By all means, we hope you win, and if you don’t, hopefully, this gives you some exposure and the community selects your production next year.

As for us being biased, we have made every attempt for the Audio Verse Awards to be fair, our data is checked as thoroughly as Santa’s list for malfeasance, and that includes internally. We are not a secret panel of judges making secret decisions on our own criteria.

We’ll keep that intact any way we can.

Hit us up on our contact page, and we’ll get back to you as soon as we can, in the order we received it!

Awards season is very busy, please bear with us.

Your cart is empty.